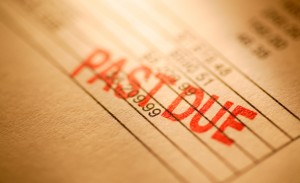 Visa reported a fall in overall card spending and at £85.2bn, UK residents had spent 3% less on their cards than in the same period last year.

That figure suggests Britons had begun to rein in a worrying tendency to spend money they could ill-afford. But the figure masks (a) the debt- fuelled bumper Christmas enjoyed by retailers, and (b) the fact that spending and debt are very different things.

Company updates from Marks & Spencer, Next and House of Fraser, were either outstanding or exceeded expectations. Much of their success was bought on the back of spendthrift credit junkies whose will to have a bigger TV or sofa is bigger than their ability to pay.

It seems churlish to rate strong sales as anything but positive. But the same people responsible for wracking up the sales now, could be the people filing for bankruptcy tomorrow. The personal unsecured debt of a proportion of the most intrepid shoppers makes for tragic and frightening reading.

Britain’s debt mountain tops £1trillion. The availability of cheap money in recent years has engendered a buy-now-pay-later mentality in some of the most financially irresponsible members of our society. The falling amount of absolute plastic spending, as demonstrated by Visa’s results last week, masks the growing indebtedness of this section of our society.

A drop in overall spending, moreover, does not equate to a drop in overall indebtedness. In fact, the climbing rate of bankruptcies suggests that those who can afford to service their debt, have tightened their belts, and the credit junkies who can’t, have continued to splurge.

The National Debtline, a charity, has been unable to deal with the number of calls it received in the days and weeks following Christmas last year. It is planning to increase its staff by 40% just to cope with the rush this year. In the two weeks after 3 January, the line received 12,000 calls, two thirds of which weren’t answered.

The explosion in TV advertisements for debt consolidation services points to a crisis in personal debt. Those who take up these offers have an average unsecured debt of £30,000, around 2% of these have unsecured debts exceeding £100,000.

Government figures show the number of personal insolvencies in England and Wales reached a high of 17,562 between June and September  – almost 50% up on the same period in the previous year.

Accountant, Grant Thornton, fears that the number of personal insolvencies will jump to 20,000 for the first three months of next year, the highest since records began in 1960.

The debt crisis could end in several ways. At around 1%, real interest rates (the base rate minus inflation) are at an historic low. This has led to a flood of cheap money. One possibility is that a gentle raising of rates in the medium term would see a gentle methadone effect, with the debt junkies slowly weaned off their addiction. On the other hand, it could all come crumbling down.

Should that happen, furniture retailers are particularly at risk. Their buy-now-pay-later deals perfectly match the mentality of the credit junkies who are living from minimum payment to minimum payment, with no hope of ever paying off the capital. One more flat screen TV or leather sofa at £1,500, and their debt burden is tipped over the edge.

But furniture retailers are as addicted to credit as their consumers. Between 40% to 80% of sales in stores that offer it are on credit. And the profile of the ideal furniture consumer, matches the demographic most likely to be highly indebted. This is hardly surprising. The type of people reputable furniture retailers want in their shops are exactly the type of people reputable lenders want to give money to.

Nobody wants bad debts, but the profile of the hopelessly indebted does not immediately ring alarm bells for service lenders. There are safeguards in lending policy which prevent people with no job, County Court Judgements or bad repayment histories, from gaining too much credit. But the tools lenders use to make judgements are fairly blunt. They don’t, for example, tell lenders how much existing debt a person is in compared to their earnings; only that they are paying the minimum payments.

The people getting themselves into more and more unmanageable debt have husbands and homes and jobs. But they’re bank clerks who live like Swiss bankers: 2.5million people in Britain habitually spend more than they earn. A turn in the economy, a rise in unemployment, and these people will feel pain. And that will hurt furniture retailers too.

Profile of the indebted (according to the most typical caller to National Debtline):

Profile of the ideal customer (according to Neil Allan, Harveys md):